Old Toronto, as its name would imply, is full of historical buildings. This is a highly coveted area, but century homes are prone to deterioration and animal entry. Aging structures must therefore be maintained and protected. The following case study tells the story of a squirrel removal from Victorian home in Old Toronto that suffered multiple infestations because its roof was falling apart. For guaranteed wildlife-proofing and removal, call Squirrel Control.

The owners of this Victorian residence gave Squirrel Control a call after hearing noises in the attic. It was early fall, and squirrels could often be seen running around on the roof. This is a very active time of the year for squirrels. A technician arrived the next day to inspect but the roof peaked too high above the ground for him to do so himself. Inspections must always be carried out safely so all factors can be identified without any risk of injury. Victorian homes often have high ceilings and remarkably peaked roofs that require special safety gear to climb. The next day, the technician returned with another member of the Wildlife Shield team. Together, they could use ladders and ropes to properly examine the roof. The soffits, gutters, roof vents, and chimneys on this property were all examined closely for exposure and vulnerability to wildlife. 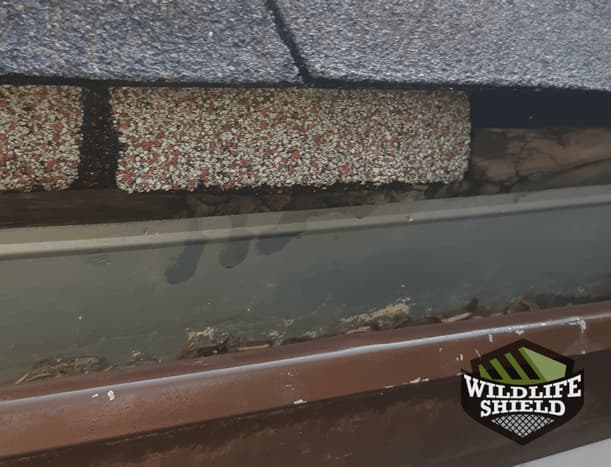 Upon inspection, the technicians on duty found that the drip edge was deteriorating. Shingles were falling off the roof and the edges were separating from the framing of the house. Some metal mesh was already screwed into the drip edge, signifying that other wildlife removal technicians had been here before. The mesh however did not cover enough to stop squirrels from invading. Two holes were found along the edges of the roof and one of them had a squirrel’s nest inside.

Once these weaknesses were found, the technicians installed a one-way door to the entrance of the squirrel’s nest. This would allow the squirrels to leave without being harmed. Once out, they would not be able to get back in. Squirrels usually exit their nests a few days after the one-way door is installed. The other hole in the roof was patched and 17 feet of the drip edge was covered with steel mesh, a material strong enough to resist rodent chewing and tearing.

Another 30 feet of exclusion along the drip edge was recommended to prevent this from happening again, but the owners declined. While it may seem extreme, old roofs are highly vulnerable to squirrels – especially in the fall. Squirrels will happily tear through any weaknesses they find on the roof to get inside where it is warm and safe from predators. Choosing not to protect the rest of the roof could mean another invasion in the future. 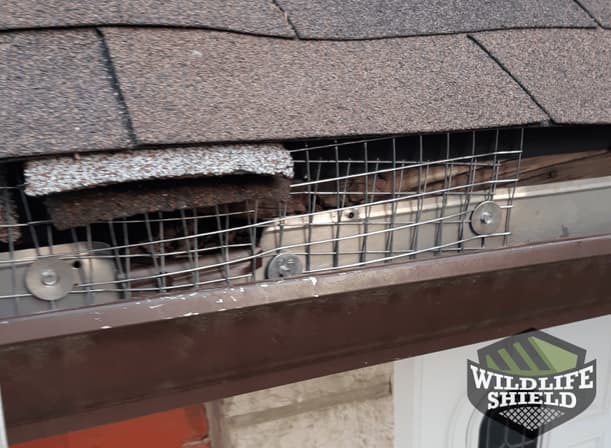 Later, in November, the owners called Squirrel Control back to say that activity was still being heard on the property. The experts at Squirrel Control suspected that the state of the drip edge was the cause of ongoing activity and promptly returned for a follow-up inspection. The exclusion work they had installed along the drip edge was still intact, but a new hole had appeared near the covered entrance to the nest. The squirrel likely chewed its way through the roof to get back inside. Had the drip edge been fully excluded in the first visit, this would not have happened.

The remaining 30 feet of drip edge thus was covered with steel mesh, and the one-way door remained for another few weeks to let the squirrel leave. In December, when the squirrels were gone, a technician returned to this Old Toronto home to remove the door and close the entrance to the nest. 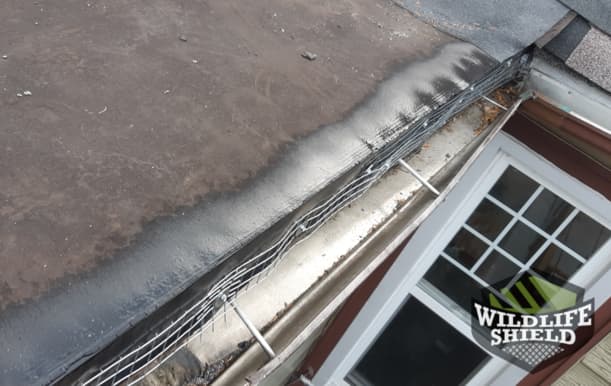 Squirrels are persistent animals that have no trouble chewing through tough materials like wood, plastic, and aluminum. It is important that you keep your roof in good condition and that you keep it protected to prevent anything like this from happening. If you are interested in wildlife-proofing your home, or if there are squirrels giving you trouble, reach out to Squirrel Control. Our technicians are highly experienced in squirrel removal and have been rigorously trained to provide you with the best service. Call Squirrel Control for safe, guaranteed pest control services.