This article recounts a squirrel removal and attic remediation job in The Beaches. A squirrel had chewed its way through the drip edge of a home and reached the attic inside. To remove it, members of the Squirrel Removal team installed a one-way door to the animal’s entrance and let it out. Once evicted, the hole was sealed shut and the attic’s insulation was removed for disinfection. To see how we can help squirrel-proof your property, call Squirrel Control.

The homeowner in this case called Squirrel Control in the spring, immediately after they saw a squirrel break into the roof through the drip edge. Squirrel invasions like this are common in the spring when females need a place to nest and raise their pups. They find attics attractive for their warmth and safety from predators, so they break in through gaps in the drip edge, soffits, or the vents on the roof. A technician came to investigate the following day.

With every job, our technicians investigate thoroughly. This allows us to locate the nest as well as any other vulnerability that should be addressed, providing you with a more complete service. Here, the technician found that a squirrel had indeed broken into the roof through the drip edge. A small hole, surrounded by chew marks, was found in the drip edge near the chimney. Squirrels often chew on the gaps they find in the drip edge like this to reach the attic inside. Given the entry point and the squirrel activity on the roof, the technician confirmed that a squirrel was nesting in the attic.

Another hole was found in the soffit beneath the entry point in the drip edge, as well. Though it was not shaped like an entry point that a squirrel had made itself, it provided animals with an opportunity to nest in the attic. The squirrel may have been using this hole as well. Squirrels and raccoons could crawl into this opening, so it would have to be sealed off.

The technician recommended having the squirrel removed with the use of a one-way door. The one-way door would be installed to the entry-point and would allow the animal to crawl out safely. Once out, it would not be able to get back inside. In addition to the removal, the technician recommended having the entry point disinfected. This would remove odours and any harmful pathogens that the animal may have left behind. The homeowner agreed to go ahead with the removal immediately.

First, the technician sealed the opening on the soffit. This was done by screwing a 16-gauge, galvanized steel mesh directly into the soffit itself. Galvanized steel is a strong, flexible material that resists animal chewing and tearing while being fully weatherproof.

Next, the technician installed the one-way door to the entry point in the drip edge. The squirrel would be out within a few days or weeks to feed. Squirrels usually keep other nests, and because we let them stay in the neighbourhood, they do not have much trouble readjusting. They know the neighbourhood well and can find other places to stay.

As expected, the squirrel was out within a few days. The homeowner stopped hearing noises in the attic and there was a decrease in squirrel activity on the roof. A technician then returned to the property to remove the door and replace it with galvanized steel mesh.

A few months later, following the squirrel’s removal, the homeowner contacted Squirrel Control’s sister company Attic Insulation Toronto so they could have their insulation inspected. We offer detailed inspections and attic remediation services to improve the overall quality of the attic. Insulation can deteriorate with time, driving energy costs up and decreasing the quality of the air in the house. Animals, like squirrels, will also contaminate the insulation with feces and damage the attic, so it is a good idea to have the attic checked out after an animal invasion.

In this case, the insulation was old and a little damaged from the squirrel’s nest. The technician on site recommended having the insulation removed, then having the attic disinfected to remove all germs and odours. The homeowners were interested in doing some major renovations to the house and roof, so they were happy to remove the insulation and replace it later with a higher quality insulation that would last a long time. 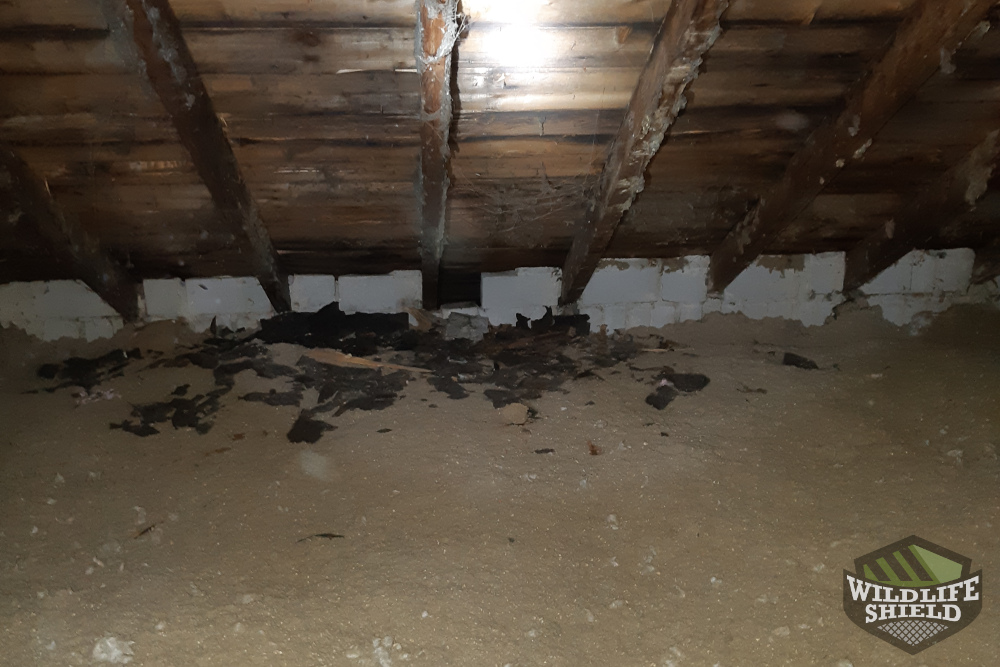 Wildlife cause damage to attics, tearing at the wood and disturbing the insulation. Animal feces and urine also damage the insulation, spreading germs and lowering the quality of the air.

Over the next few days, two technicians removed all of the insulation. This is done with the right equipment and training to safely remove the materials from the attic space. Once removed, they would be disposed of properly. Interestingly, debris, sawdust, and concrete stones were found beneath the insulation. Previous owners may have done some renovations or attempted to insulate the attic themselves. These materials only weigh the attic down and do not provide proper insulation.

Once the insulation was removed, the technicians fogged the attic. This removed all the germs the squirrel may have left behind and all odours that had accumulated. Clearing out the attic and disinfecting it this way provided the homeowners with a fresh start. The new insulation would be clean and more effective, decreasing the costs of heating and cooling and making the air cleaner.

Squirrels are highly destructive animals that should be removed from the attic as soon as possible. In this Beaches case, the homeowners called Squirrel Control as soon as they suspected a break-in, avoiding further damages and costs. A quick removal and exclusion of other potential entry points evicted the squirrel humanely and kept it out. If there are squirrels in your area, or if you are dealing with an invasion on your property, call Squirrel Control. We offer safe and reliable squirrel removal and wildlife-proofing services.