The initial call to the property was for consistent noise in the attic both in the daytime and also at night. This is unusual as raccoons are exclusively nocturnal and squirrels are diurnal in that they sleep at night and wake in the day like humans. If the animal is being heard night and day the likely answer would be attic mice, not European house mice but native North American mice often mistaken as voles, that see your home as a big warm rock with a cave called an attic. They do not know you have food and are unlikely to seek it out in the house but instead hunt outside and use the attic exclusively for nesting and breeding. A technician was sent out to inspect for an opening either of the three animals could have used to enter the attic and to exclude with a one-way door to humanely evict the animal from the space or to treat and exterminate the wild attic mice.

The initial inspection of the home revealed a highly accessible back roofline, the drip edge as it is called, of about fifteen feet. This opening could allow anything from squirrels to mice to raccoons. This area had to be sealed off and a one-way door installed to humanely evict the animal. One way doors vary in the way they function. A spring-activated door closes the middle panel on its own so the animal has to push hard to get out. A gravity door is most often used for rats to expel them from the house. The gravity door has no springs and simply uses the weight of the middle panel to keep rodents and wild animals from access the entryway from the outside. This is ineffective in some cases as a smart animal like a raccoon or a squirrel with some ingenuity can simply lift the door up and re-enter. The sprig-held door cannot be lifted in this way. While the animal is strong enough to get through it they do not have the paw strength to lift the spring door back up.  Further, severe roof damage was found at the soffit intersection of the roof and the drip edge where a rotting piece of wood was the only thing keeping out the weather and wild animals. It was sealed with waterproof galvanized steel mesh.

The interior inspection of the attic revealed no squirrel babies. However, during the months of February and march as well as during the late summer in July and august squirrels will break into attics with the intent to mate. Each squirrel has only two days a year of fertility, one in each of the two sides of the year. The squirrel female must find and mate with as many males as she can in that one day to assure she is pregnant. She will then find as much food as she can and store it in your attic where she will wait for her immobile babies to be born. Like humans, squirrel babies require constant care for the first four weeks of their life. That means if you have a pregnant squirrel in your attic then you better get it out right away, if you wait it will be ten times harder to get her out once she has her babies.

The initial measures taken by the technician included the installation of a one-way door to allow the animal to humanely vacate the attic while preventing it from re-entering. This process can take three to ten days. The technician also excluded the back drip edge at a length of about fifteen feet. This opening could easily allow animals and rodents to ingress into the attic and needed to be sealed. The one-way door was installed at the largest entry point of the drip edge opening.

The proposed exclusion by the technician was extensive, fifteen feet of drip edge was completely accessible. This can occur over time especially in places with extreme weather changes like Southern Ontario. Roves are not like houses, they are temporary, disposable. A roof should be redone at least every decade if you want it to keep your home safe from the elements. Fixing things like damaged drip edges and plastic roof vents is a must as they can be easy access points for wildlife and rodents. 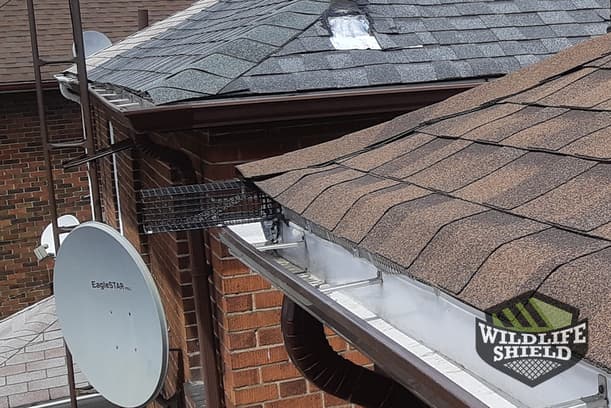 In conclusion, the squirrel was evicted from the attic and the one-way door was removed from the back drip edge of the house. The house was effectively protected from rodent and wildlife infestation or occupation, respectively, and the customers were pleased with the results. No mice or squirrel babies were found in the attic space.