The technician immediately went on to conduct an exterior inspection. The exterior inspection is the most important stage in the entire squirrel exclusion process as it determines the later outcome of the exclusion. The technician here slowly and thoroughly looks for vulnerabilities and possible entry points around the perimeter. These can include holes, cracks, and gaps that the squirrel can easily exploit and squeeze through.

Finding these other vulnerable spots is very important to prevent a future infestation. Once the vulnerabilities are found, the technician then conveys this in a very detailed list and is then given to the contact person or homeowner for further evaluation. The technician continued the exterior inspection on the third floor. The homeowner said that the squirrel entered the deck and saw a live squirrel there. Eventually, the technician found the entry point. The entry point was located above the drain. The technician concluded the squirrels removed the fixture with force and entered inside.

The technician initially moved on to the second stage of the squirrel exclusion process with an ingenious contraption called the One-Way Door. The One-Way Door is a tunnel-like device that allows the squirrel to enter and to pass through pass not re-enter as the one-way door is just one-directional. Once the squirrel is aware that it cannot get back in, the squirrel has no other option to relocate and leave the property for good. The technician mounted the one-way door directly on the entry-point with the help of washers and bolts to secure them in place. Squirrels are very destructive animals that can cause thousands of dollars in damage! 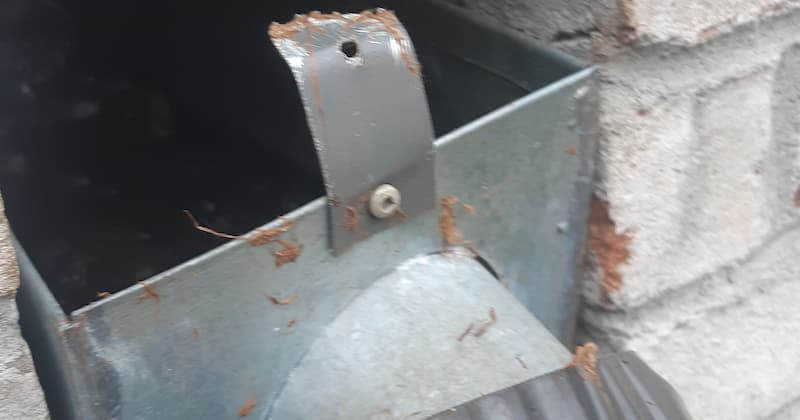 The technician left for a couple of days until the squirrel felt the need to leave the space in search of food and water.

The technician came back and took the One-Way Door off and inspected the space for any squirrels. After it was clear that there were no squirrels, the technician proceeded to seal the entry point with durable material called galvanized steel mesh. This material is resistant to all types of attacks against wildlife animals as well as insects and rodents.

After the technician installed the mesh on the entry point, the homeowner reported no noise and was satisfied with the results. If you hear suspicious noises or activity taking place, it will most likely be squirrels. Squirrels are often busy during the early hours of the day.

If you have a squirrel on your property and want to get rid of it, contact the technicians from Squirrel Control. Our squirrel removal specialists have been in the industry for well over a decade and continue to make a difference for families, individuals, and business owners!