This article outlines a squirrel removal and proofing job in Mississauga Valley. The homeowners in this case witnessed a lot of squirrel activity on their property and could hear the animals making noises in the walls and roof. The Exterminators team inspected the issue, found where the animals were coming from, then removed them safely. A full exclusion of the roof would prevent the animals from coming back.

The Mississauga Valley neighbourhood, located near Hurontario and Burnhamthorpe, is an established residential area of central Mississauga. It is filled with quiet streets lined with a mature tree canopy.

Besides its several recreational parks, Cooksville Creek also runs through this neighbourhood, adding its natural beauty.

With all the green space and green yards, it is no surprise that squirrels are abundant in the area. They feed mainly on acorns, berries and even eat the bark of certain trees. Nests can be visible in the winter months high in the bare trees.

In cold weather, squirrels will often search for more insulated spaces where they can nest and stay warm. Attics offer them an ideal space as they are warm and away from predators.

We will describe how we strategically secured this home from squirrels entering the attic and the home itself.

The homeowner called us with the concern that squirrel activity had been taken place in his home for some time. Noises were often heard coming from the attic space, but they were unsure how they got into the structure and asked us to look and see what could be done.

Unfamiliar sounds coming from the attic, from behind the walls, or from under the floor are usually the first signs that an animal has made its way into a home.

We dispatched our wildlife removal experts to assess the problem. As part of the process, our professionals examine the entire perimeter of the house looking for any points of entry, with a focus on the roof. 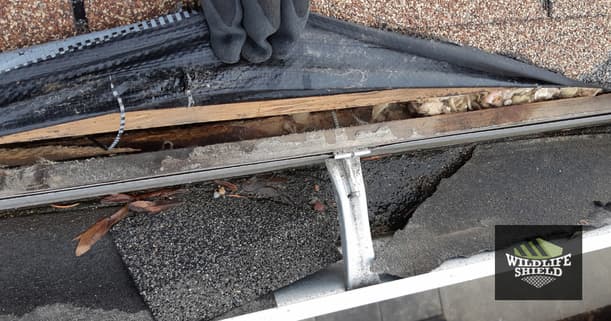 It was noted that the roof offered several potential entry points including an area along the drip edge that was not fully sealed. The roof vents also posed a potential entry point and would have to be covered. Most roof vents are made of plastic and animals easily chew through them. The hot air that escapes these vents in colder temperatures often attracts various wildlife. Soffit intersections also offer animals enough of a gap to enter the structure and it was suggested that those be secured.

Upon client approval, we started working on eliminating entry points on the home’s exterior. Our technicians began by placing a galvanized steel mesh cover on a wall vent. This step ensures the structure is not compromised by squirrels taking advantage of small openings on the side of the house.

Next, we proceeded to work on the roof where many issues were found. Eight roof vents were covered with the same galvanized steel mesh material used on the wall vent. Two plumbing vents were also protected from entry.

To protect the soffit intersections and the edge of the roof, we used about six feet of mesh.

Because we can not be certain if the squirrels are inside the house at the time of the job, we install a one-way-door at the most likely point of entry. This door will allow any animals inside to vacate safely and not be able to re-enter. We leave the one-way-door in place a few weeks depending on weather conditions, after which we return to remove it and seal it.

Most people enjoy having squirrels roaming through their backyards, chasing each other, and jumping from tree to tree. Many even make a point of feeding them various nuts to enjoy them up close. But when these cute little guys decide to move into your home, it is time to remind them to stay outside.

Attics can turn into cozy nesting sites and nesting sites turn into more squirrels that can easily destroy the structure of your house. Any wildlife inside an attic will compress the insulation and thus decrease its heat retention capacity. Wildlife can also urinate and defecate inside attics, and squirrels, in particular, can chew on electrical wires.

In this specific case, the homeowner was quick to identify the problem and we promptly responded by securing the structure and therefore keeping the squirrels out.