This case study details a squirrel removal service in Markham. The initial call to the property was for a squirrel in the first-floor ceiling of a two-story home. The customer did not know the entranceway but heard the animal’s activities and saw it outside of the home. A technician was sent out to inspect for an opening and to exclude with a one-way door to humanely evict the animal from the space.

Markham is a very old township that was once joined with Vaughan to form Thorn hill. The construction of a highway through the middle of the town caused it to split both geographically and economically. Vaughan is the home to the wealthy while Markham is a more industrial town. The story starts in  1791 when a man named John Graves Simcoe who started offering land across the full length of Yonge street which, till now was mostly unoccupied. He offered land for free in exchange for each landowner to clear away a part of the forestry and grasslands that would become Yonge street. This was so effective that in the war of 1812 when the US militia tried to march down Yonge street they did not realize how populated it was and were rapidly attacked by hidden enemies.

The initial inspection of the roof of the house found a first-floor entry point accessed by the squirrel to enter the first-floor ceiling. A one-way door would be attached as well as an entryway near it that would be excluded with waterproof galvanized steel mesh. The technician also inspected the rest of the exterior of the home for other possible entryways for both rodents and wildlife.

The initial measures taken by the technician included attaching a one-way door to humanely evict the animal from the first-floor ceiling. Preventative measures were sought to seal off openings that would be easy entry points for rodents or wildlife. The technician wrote out a quote for both necessary and preventative sealing of possible entryways and the customer was interested in all the exclusion described. 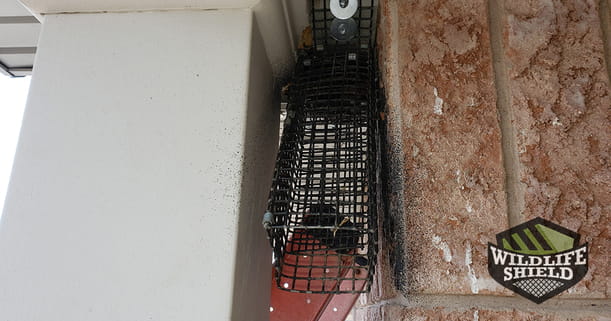 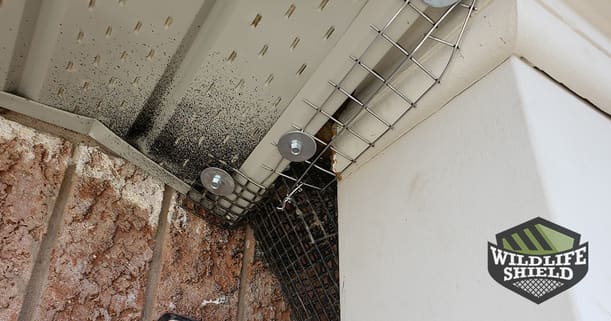 The proposed exclusion by the technician was to exclude and attach a one-way door to the first-floor entrance the squirrel used to enter the first-floor ceiling and a small opening in the soffit near the main entryway, this was sealed with one foot of waterproof galvanized steel mesh. The technician then installed a total of eighteen weep vents in mortar-less spaces between bricks. These vents are important and help the house breathe but are also easy access points for rodents like mice and insects like cockroaches. Sealing it off with a galvanized steel vented insert allows the weep vent to continue functioning normally while preventing ingress.

Five wall vents were installed to prevent wildlife and rodent entry often including the vent for the oven fan, dryer vents, and other ventilated access points like the bathroom vent. Roof vents were also installed to prevent wildlife from accessing the roof vents as entryways. This is often because most roof vents are made of plastic resulting in an easy point to access the attic. Ten of these were sealed with black rubber-coated galvanized steel mesh cages. Similar to what was used to seal off the wall vents. This allows the vents to continue functioning as normal but prevents animal access. 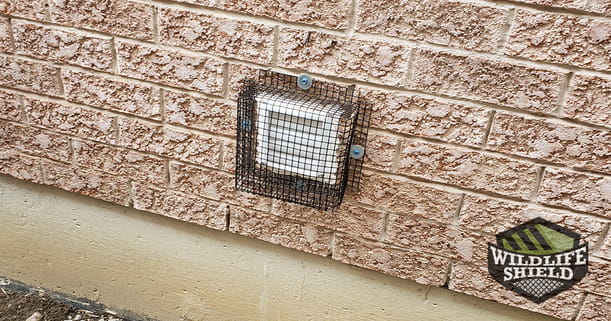 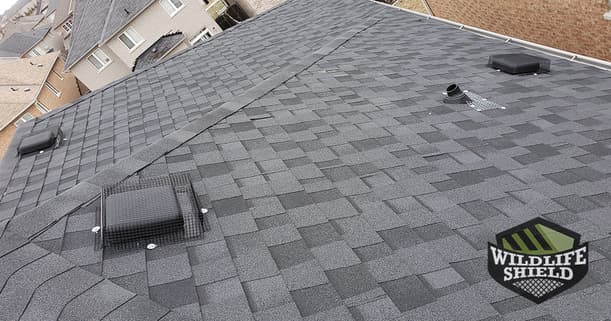 In conclusion, the squirrel was evicted in only one day of the one-way door is up. The technician took it down the day after and completed the exclusion of the wall vents, weep vents, ridge and roof vents. The process was highly effective the customer’s house is not very well protected against rodents, insects and wildlife.