This case study details a squirrel removal and mouse extermination in Forest Hill. The initial call to the property was for sounds being heard between the bedroom and attic. The technician was sent to inspect the attic for signs of mice occupation and then to exclude the roof and treat the mice inside. The customer was aware of sounds and smells coming from the attic and wanted the situation dealt with.

Forest Hill was a former village in mid-town Toronto that was amalgamated into the city as late as 1967. Because of this the part of the city so named is very independent, and has kept its name of forest hill. This area is very wealthy and contains some of the largest houses in the city. Like Bridal Path, this part of the city houses Toronto’s elite. Though in 1971 this area would have been ripped asunder by a plot to build a Spadina express-way, likely destroying many old houses and ruining a very high-class area forever. The people of forest hill and the Annex protested en mass until the government pulled out of the plan. The beauty of the city once more maintained.

The initial inspection of the roof and property found multiple openings on and around the roof as well as accessible roof vents and three foundations gaps and three roof-soffit intersections that could all allow mice or other animals into the home. Exterior tamper-proof bait stations containing commercial-grade rodenticide were recommended to quell the exterior mouse issue on the property. The mouse issue led to the discovery of an opening on the side of the house that could allow squirrel entry. A two-man crew was sent to inspect.

The interior inspection for the attic found mouse feces in the attic and insulation. No dead animals were found. The attic was then treated with tamper-proof bait stations containing commercial-grade rodenticide, placed in areas of high activity. The inspection of the first attic found very little in the way of activity of mice. However, the customer recalled a second two-story attic that did have signs of mice but no signs of larger animal occupation. While the mouse treatment was being dealt with the activity in the attic was still apparent. The customer requested a squirrel inspection requiring a two-man crew in order to scale the cedar roof of the house. This was assured with the discovery of a hole in the insulation of the second attic.

The initial measures taken by the technicians upon discovering an entry way for squirrels was to exclude the south side and to attach a one way door to allow the squirrel to humanely vacate the attic. The mouse treatment both in the main attic and the two-floor attic outside of the house was effective in quelling the mouse infestation. Two exterior rodent bait station that is weighted and tamper-proof containing commercial-grade rodenticide were placed on the property. 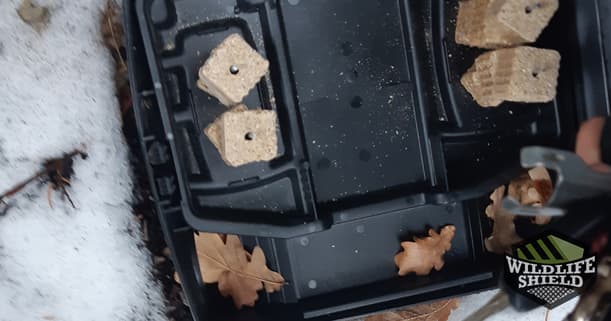 How to Stop Squirrels From Building a Nest In a Car

How Long Are Squirrels Pregnant

Do Squirrels Mate For Life

How Many Babies do Squirrels Have at a Time?